Movies are an expensive investment. Therefore producers, agents and companies would rather take a chance on something that already proved to generate money. It’s the logic behind the endless search for adapting successful books, plays and even video games and turning them into a movie or a TV series.

Adapting someone else’s original story does not mean your brilliance as a writer is being stifled. On the contrary, watching many adapted stories proves the opposite. Many times the adapted version is much better than the original.

The Netflix series “The Witcher” is a fantastic example of taking an original source and not only making it fit into a new format but also improving it (IMO).

“The Witcher” is an epic fantasy adventure filled with magic, monsters, and romance it is based on books written by the Polish author Andrzej Sapkowskiare and three video game series. The  Netflix TV series is based mostly on the books, though many things were changed or lost in the adaptation process to adjust it into the medium of a TV program.

Here are 7 adaptation lessons from “The Witcher”:

SPOILER ALERT – If you have not watched or read the books there might be some SPOILERS in this post. 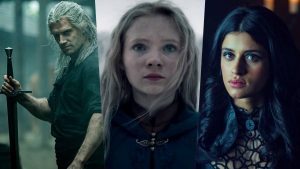 Lesson #1 – Add more PoV to Make it interesting.
Geralt of Rivia is arguably the main character of The Witcher. He is, after all, the title character and so he is the PoV (point of view) character in both the books and the games. Netflix’s The Witcher, however, does something very interesting. It does not make Geralt (Henry Cavill) the sole PoV character in the series. Instead, audiences follow Geralt, sorceress Yennefer of Vengerberg (Anya Chalotra), and princess Ciri (Freya Allan).

Main Lesson – Do not hesitate to play with several PoV adding them can improve the characters, plot, and story. 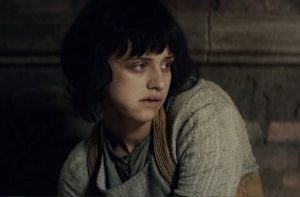 On the other hand, the show explores Yennefer’s past in great detail to the point that an entire episode is dedicated to it. This allows us to get to know her better, as we already know her side of the story and where she came from before she became a powerful mage. It makes for a much more complete character that audiences (and readers) can relate to.

Main Lesson – Adding backstories to secondary characters allows you to give them a deeper, meaningful arc and make them a multi-level character and not a flat one. 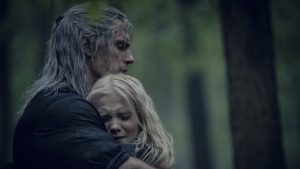 Lesson #3 – Add Layers to a Character.
Geralt, is a loner figure who finds himself having to take care of Ciri and becomes a father figure for her. In the books, Geralt’s parenting of Ciri is a bit bumbling and careless in a way that shows he’s yet to understand what being a father is. He mostly tries to find a way for a woman to become Ciri’s mentor, such as when he calls Triss to teach her magic or when he needed to take her to Mother Nenneke.

While he still does those things in the show, Geralt seems to be more in control as a father than he is in the books. The reason why he asks different women to mentor Ciri is that she can protect herself when the time comes if Geralt will no longer be around to protect her. In that sense, Geralt is more of a forward thinker in the show than a bumbling father in the books. It allows his character to have more layers than only as being the protector .

Main Lesson – You can take the same events and characters but build it up in a way that would give a specific character another layer that would make them more interesting. Lesson #4 – Add Humor.
Most of the characters in “The Witcher” are serious brooding types and the events are also dark and sinister. In such a climate viewers (and readers) need some comic relief.

This is done fantastically with the introduction of Jaskier the Bard. Jaskier often seems like Geralt’s human side, a loyal friend who never judges him for what he is. Jaskier is a scene thief, throwing his flamboyant personality and loud nature onto the screen with the perfect amount of charm to make it funny.

We watch him struggle and push himself into Geralt’s life, craving a life of adventure and stories to tell. And I dare you watch him sing his songs, especially “Toss a coin to the Witcher” without having that song stuck in your head for days…

Main Lesson – make sure you have a character that can lighten up the story that viewers can cheer to when s/he appears. 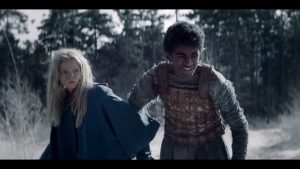 Lesson #5 – Add Characters.
After Ciri escapes the Nilfgaardian siege on Cintra, she is assisted by a young elf boy named Dara. However, Dara is an entirely new character created for the Netflix series.

One of the biggest differences between novels and movies (TV shows) is that in novels we can explore the inner world of emotions and thoughts of a character. This is not possible on screen as it is a visual art where thoughts and feelings have to be explored via actions.  A great way to overcome this is by creating a character that the main character can speak to and in this way reveal their thoughts and emotions. By adding Dara we are able to follow Ciri’s journey and have her someone to talk to and mirror her experiences.

Main lesson – Add a character that can help us learn about the inner world of a person. Lesson #6 – Keep It Visual
The Season 1 finale of “The Witcher” centers on the clash between mages and Nilfgaardian soldiers at the Battle of Sodden Hill, where Yennefer and her fellow magic users fight to defend their lands from the army’s assault.

The Battle of Sodden Hill, gives viewers a series of dramatic scenes packed with high fantasy action. It also brings together all three main characters into one place and hints on the changes they will go through in future episodes. In the books, however, the Battle of Sodden Hill is depicted in the aftermath of it. We don’t get to read what took place.

Main Lesson – make sure to use a visual element in the books to its maximum and turn it into a pivotal moment even if it’s not in the original source. 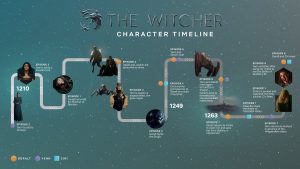 Lesson #7 – Play with Timelines to Keep Suspense
One of the most interesting parts of Season 1 is the fact that only in the last episode do we realize that we have been watching different timelines of the story and not a parallel one.

Due to the fact that the show is based on several short stories and other books that span over centuries, the writers had to play with the timelines in order to introduce all the main characters while introducing us to the world building of the Content all in the first season.

Main Lesson – though playing with timelines might be confusing, if done right can elevate the suspense and be intriguing.

What are YOUR tips and thoughts on how to adapt original source?