FULL DISCLOSURE – There is only one other writer’s writing who I admire more than Neil Gaiman’s. No wonder they collaborated a few times (For those who haven’t figured it up, it’s Terry Pratchett).

When I “grow up” I only can dream of being able to build such fantasy worlds with direct implication to our reality, as they do. Therefore it would not be a surprise that I LOVED The Sandman.

What I didn’t expect is the strong reaction the blogosphere had on this show. It seemed that fans of his work either hated it or despised it. None of it made any sense to me.

Is the show flawless? NO. Is it a groundbreaking piece of art? NO. Is it entertaining? YES. Does it make you think? DAHH, it’s Neil Gaiman’s show. Does it satisfy the fans? ABSOLUTELY. Does it bring new audiences interested in the original? DEFINITELY!

Then I guess, it ticks all the boxes for why the show is great.

For scriptwriters, like me, the show has been a fantastic example on how to balance between staying true to original source while breathing new life and making it into something different.

Here are 6 Reasons why The Sandman is such a great show: 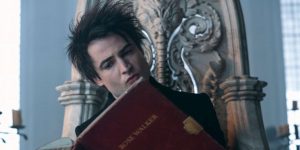 #1: It keeps the main premise of the original.

The Sandman comic series is, at its core, about the very nature of stories. Stories are like recurring dreams. They bubble up from our unconscious, often appearing the same — and yet, looking closer, you might find the details shift in every telling.

Netflix’s “The Sandman” is about as faithful an adaptation of the source material as could reasonably be imagined. But when we look carefully into it we can see how a new world was created at the same time. And just like with stories and dreams that repeat themselves it changes but the core remains. #2: It managed to turn the “Impossible” into a reality.

Adapting The Sandman was considered an impossible task (maybe even Sisyphean labor, if we’re talking the language of Gaiman and his creations).

Running from 1989 to 1996, the comic was created by Gaiman with artists Sam Kieth and Mike Dringenberg (and many others), and frequently told its story by playing with the form of the comics medium. Some of that stuff is simply impossible to re-create on television.

The boundless creativity of drawn illustration can’t always be replicated via visual effects, practical locations, or the budget required for both in TV. But even with all those allowances and considerations, the show has managed to capture both the beauty of the comic illustrations while adding a new touch to it.

There are certain moments where particular panels are purposefully recreated on the screen—Sam Kieth’s artwork from the first issue, especially, gets a lot of attention in the opening episode but later develops into CG that is more appropriate for the 21st century and the tools that we have today.

Another challenge of the adaptation was Dream himself. As depicted in the comics, he has the basic shape of an adult man but the bearing of an ethereal alien, with bone-china skin and glittering stars for eyes.

This is a tall order for any flesh-and-blood mortal to fill, and Tom Sturridge does his game best by suffusing Dream with a graceful, deliberate physicality and a low, quiet rumble of a voice. After watching him, you can’t think of Dream without hearing his voice. 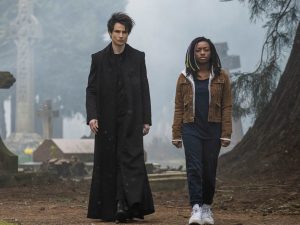 One of the most challenging issues in adopting The Sandman was the fact that it was based on 76 issues that were collected into 10 books. How on earth can you make that into a one coherent tight up season?

The solution was to base it mainly on the first two volumes, Preludes & Nocturnes and The Doll’s House and two of the most beloved chapters “The Sound of Her Wings” (issue #8) and “Men of Good Fortune” (#13).

Both stories are issue-length conversations between Dream and someone important to him; in the former, it’s his sister Death; in the latter, it’s his friend Hob Gadling. Both of these issues are wonderful, and allows us to get to know our Protagonist (Dream) from different angles.

Basing the season on those books created a flow which allowed our character to develop. It’s true it’s two totally different stories but each part can stand on its own, just like in a procedural series but still create a continuity. Like I wrote before, “The Sandman” is essentially a story about the nature of stories. Stories change over time.

Storytellers also change over time. Therefore even though Neil Geiman was at the helm of this adaptation, Gaiman is certainly not the same writer now that he was in 1988, and this show proves it.

Dream, who is Lord of the domain we all travel to in our sleep, starts the season as someone who possesses much power but still is captured by a human wizard. The wizard steals his powerful tools and imprisons him for a hundred years. When he finally escapes he is focused on revenge on humans, is unwilling to listen to his closest supporters and behaves like a sulky little teenager when he’s talking to anyone in his family.

By the end of this season, Dream regrets hurting others, he considers a human being a friend, and he questions the purpose of the nightmares he once created.

While on his quest to track down his powerful tools that were stolen from him – his helm, sand, and ruby, Dream wonders “what am  I without them?,” which he gets to find out at the end of the season.

This is a typical character’s arc which allows the writers to play with secondary characters who also change from their original source and update them with the times. It incorporates women, non-binary, and Black and POC actors into a tableau that was predominantly white and male in printed form.

The end result of these changes add much more depth to the dialog and prove the showrunners made the right decision in almost every case they chose to move with time rather than sticking to the original source. 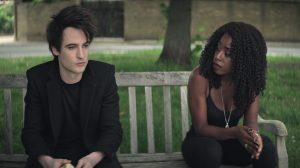 “The Sandman” is all about a universe where abstract concepts – death, desire, despair squabbling with each other on assorted planes of reality.

How do you adapt this into an age where the audience wants fast action stories? How do you make abstract concepts into physical personification that would keep audiences intrigued?

The show has managed to do it fantastically by turning them into stylishly dressed schemers with dynamic relationships who are no different than any other family members we all know.

In one of the best episodes Dream tags along with his sister Death on her errands. They engage in a surprisingly affecting conversation about life, death, love and loneliness in the process. Their affectionate sibling dynamic allows Death to say one of the best lines in the season to Dream: “You are utterly the stupidest, most self-centered, pathetic excuse for an anthropomorphic personification on this or any other plane.”

How many of us have said something on these lines to either one of our siblings or a good friend (without the “anthropomorphic personification” part.) However, it does more, it flesh out Dream as a three-dimensional character instead of a two-dimensional cipher.

But in the center of The Sandman is the humanity of people Morpheus (Dream) encounters. From the premiere episode’s father and son battling over their prisoner’s fate, to a frankly mesmerising midseason episode set entirely in an ill-fated diner, the show’s characters are sketched with heartwarming hopes and heartbreaking fears.

The Sandman is about the lives of ordinary people — the waitress, the kind woman who offers you a ride, the romantic and the liar, and how they weave a world for such magic to exist, through their dreams and nightmares.

No matter how good the script is, every show depends on how those lines are being delivered. The Sandman’s cast is almost uniformly wonderful and does fabulous work in bringing the text to life.

Tom Sturridge is pitch-perfect in making Morpheus flesh and blood, skilfully navigating his stoicism and distance with a sad, though not entirely charmless, sense of punk-Byronic loneliness. Sturridge gives him an on-screen presence that’s hard to look away from.

Kirby Howell-Baptiste is equally impressive as Morpheus’ sister, Death. She brings the vivacious love for humanity and joy for Earth to the character in a way that is quite moving in its empathy.

David Thewlis as John Dee is utterly compelling as a pyjama-clad, escaped mental patient in possession of Morpheus’ Ruby. He becomes the center of the chilling fifth episode, ‘24/7’. It is in John Dee’s pathetically human quest to steal hope from people in order to reveal the truth that The Sandman sees its greatest strength revealed.

There is a wild cast of supporting characters that truly define who Morpheus is. Vivienne Acheampong as Morpheos loyal librarian, Lucienne, who helps him on his  journey to reclaim his stolen artifacts of power. His new raven Matthew (Patton Oswalt), who is caught up in games of fate, deception and heartbreak with Lucifer (Gwendoline Christie). Boyd Holbrook as The Corinthian who makes for an enticing villain that we nearly cheer for, and Jenna Coleman as a gender-swapped Johanna Constantine – the best on-screen portrayal yet seen of the famed occultist.

All these performances add up to a delightful season, which I only hope we would get more of.

Would love to hear YOUR opinion.

Did you like The Sandman, why? If not, Why? Would love to read your comments below.