You hear it all the time – your first 10 pages (or 5 for TV) are your most important pages. To make sure readers and viewers would keep watching what you wrote, your opening scene or sequence must grab us by the throat and get our attention.

It must pull us into that world, doesn’t matter if it’s a tv script, a feature or even a short. All that matters is your opening moments, your first initial images, must paint us a picture of the environment and landscape which later will play out for us. You need to give us all these things which will make us pay attention and wonder whether or not this story is going to take us somewhere interesting.

Peaky Blinders is a one of the best examples on how to do it. Let me be transparent – I’m not a fan of gangster movies or shows. Any type of even a hint of violence would make me “switch the channel” or walk out of the cinema (yes, I did it several times…). So how come was I able to watch all 6 seasons of Peaky Blinders, you’ll ask? The answer is very simple – the opening scenes of each episode were mesmerizing. 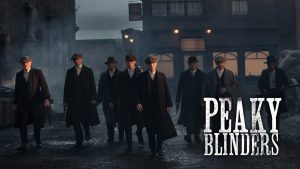 1. Tone.
In the first few minutes of any screenplay or film, the tone of the story causes an unconscious expectation in the audience’s mind as to how they should view the film. Is it serious, funny, somber, light-hearted, etc?

Peaky Blinders sets the tone instantly. The whole scene is shot in a cold, grayish- blueish colors. It’s in the city and we know it’s 1919. It indicates that we’re not going to watch another version of Downton Abbey, but the other side of the spectrum. We’re in the city and going to watch hard-working blue-collar people struggling to find their way in the world after WW1.

Not only that, but the way also we meet Tommy Shelby entering the street, riding on his horse and watching the Chinese man and girl appear at the other side of the street immediately brings to mind Western movies and a preparation for a dual fight. It clearly indicates that this story is about fights and “bad guys” vs “good guys”, however, we don’t know yet who is who.

Main lesson – Create a visual exposition which would give immediately the feeling of what this story is all about. The cinematography, light, colors that you choose and references to what we all have in our collective consciousness that would let us know what we are going to watch. 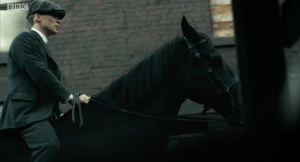 2. Character.
The opening scene should introduce us immediately with our Protagonist. We need to meet our main character as s/he moves through their world in a way that shows what kind of person they are, what kind of things they do so we can get to know them and understand the world we are in and the time we are in. This would make an excellent opening sequence.

In Peaky Blinders we meet the Protagonist – Tommy Shelby, immediately in the first scene. Not only do we meet him, but we also learn a lot about him. We know instantly, even without words, that he’s a man people are afraid of. We even experience that disobeying his wishes is a dangerous thing to do. All this with hardly any words, only actions of the people around and how they respond to him.

We first meet him riding a black horse into a poor neighborhood courtyard. When he enters, all life stops. In contrast to the poverty all around him he is immaculately dressed in a dark suit (odd for a man riding a horse), which shows already there is more to him than meets the eye. We don’t get a good look at his face as his face is hidden by the cap he is wearing. This cap is his (and his gang’s) signature sign, only later would we understand the significance of that cap and how it is being used.

Next, we see him getting what he wants with hardly any words exchanged. Immediately we know this is a “man of few words” which will always get what he wants. To make it clear on how he gets what he wants, we see him taking out what will be his constant companion, his cigarette, and we get a glimpse of a revolver hanging in a tan-leather army issue holster. It indicates this man used to be in the army and is not afraid of using this revolver when he would need it.

Main Lesson – This is a fantastic scene on how we learn so much about our Protagonist without hardly any dialog, only visual elements, which are perfect for movies – Black horse, cap, cigarettes, revolver, neat suit and the response of people to him. 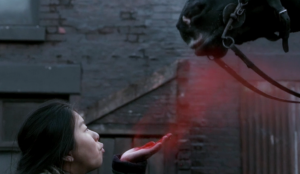 3. Teaser
After Jaws used a teaser as a literally killer opening scene in 1975, making your opening scene a teaser has become something of a screenwriting cliché. However, it’s only a cliché if done ineffectively; executed correctly, it can be a powerful storytelling technique.

The hard truth is that most professional readers, development execs, and reps make a value judgment on your screenplay within the first 10 pages. And many viewers make a judgment in the first minutes of your film. If your story and writing hasn’t hooked them by then, it’s a knife in the gut utilizing an opening scene as a teaser can help prevent this.

What is a teaser? It’s simply an opening moment, scene, or sequence intended to hook the audience from the get-go by generating curiosity and/or conflict that leaves the audience wanting more.

In Peaky Blinders it’s achieved by watching Tommy Shelby on a horse and a Chinese girl blowing red powder to the horse’s nose. We have no clue what it means or the purpose of it. However, the contrast between the red powder blowing into the horse’s nose and the grim grayish colors all around already keeps us hooked.

We get a bit clearer about who the man is and what is he doing when we hear one of the kids, who are hiding and eavesdropping on the scene, explaining to his sister: ‘They’re doing a magic spell to make it win a race” We now get more information both about the Protagonist, but also we’re curious to know why does he need it.

Main Lesson – Create a scene where the audience may have no idea what’s going on, but by raising so many questions, the opening scene will generate intense curiosity and demands attentive engagement throughout the running time. 4. Theme.
Openings should set up the story’s theme. It should indicate what the issues this story would deal with. The theme in a screenplay is a dramatic question. It’s the writer’s point of view that they wish to express about a specific subject.

From the opening scene of Peaky Blinders we know that some of the themes this show would examine is the working class struggle in cities, such as Birmingham, after WW1, life of those who returned after the Great War, gangs, violence and crime in Britain in early ‘20.

The way we are exposed to those themes is not through dialog but through well thought choices of cinematography and focus on small physical things, like the street, the difference between the type of clothes of the local people and Tommy, the revolver and Tommy’s cap and most of all the short sentences at the end of this scene “They’re doing a magic spell to make it win a race” and “Those Peaky Blinder devils are using witchcraft now”

Main Lesson – Find ways to show the themes of your story from the start, whether with dialogue or memorable visuals that symbolize your theme. 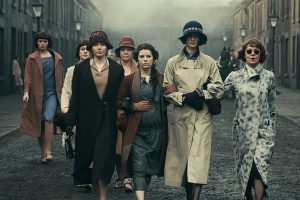 5. Surprise.
If the goal of the opening scene is to grab the attention and get us hooked, nothing will do it better than “turning the tables” on what the audience expects. All good opening scenes would have a twist at the end of it to show that what you’re going to watch is something new which you have not seen before.

Peaky Blinders does it in several ways:

What other ways do YOU know of making the opening scene strong and memorable?