Adapting any original source into another medium is a tricky thing. But when adapting a historical novel the mission becomes a challenge like walking on a tightrope between the Twin Towers (the fact that one person has achieved it proves it is possible).

The Last Kingdom is a fantastic example of how to take original sources (books) and turn them into a successful TV show. For those who didn’t know, Netflix’s The Last Kingdom is based on a historical novel series by Bernard Cornwell called The Saxon Stories, about 9th and 10th century Britain.

The protagonist (both in the show and in the books) is Uhtred of Bebbanburg, a man born to a Saxon lord but captured and adopted by the Danes. The TV show adapted the first ten novels of the series.

Given the amount of material covered in the books, adapting an entire book series without certain omissions and deviations is practically impossible. As a result, many changes had to be made during the adaptation.

Having read most of the books in The Saxon Stories I’ve found the TV show did a better job in telling the story and created a much more interesting story than the books.

Here are 7 reasons  which made the TV series better than the books. 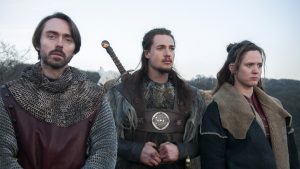 #1: POV (Point-of-View).
The books are written in first person voice (Uhtred), which means we only get to see things from his perspective. Other events or perspectives that take place during this period cannot be seen as he is the story teller.

In the show we hear his voice as the narrator, but we get to see other POV of other people, such as Alfred.

One of the great things the scriptwriters did was to change from one Protagonist to a dual ones – Uhtred & Alfred. This made it into a finer drama where the conflicts are better presented.

Main Lesson – First person story might be good and engaging as a novel, but when it comes to the screen it is limited and doesn’t give us, as viewers (or readers) the opportunity to see a wider picture of the story. 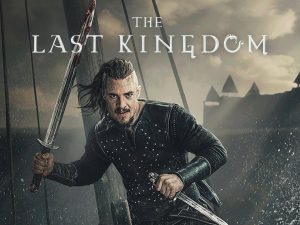 #2: Pace.
The Saxons Series consists of 13 books by now. The events taking place in the 5 seasons of the show cover 10 books. That alone is an indication about the pace of the books.

The reason is that each book was written as a stand-alone book. As a result, in many of the later books there are repetitions and reminders of things that took place in previous books. As a reader, I have to admit, I skimmed through those parts as it slowed the pace and interest in the story.

In the show, they did a fantastic job of combining  few books together to highlight the main interesting events which led to the main resolution –  Uhtred regaining back his beloved Bebbanburg castle.

Main Lesson – don’t hesitate in making the pace quicker and omit anything that strays from the main storyline which leads to the resolution. 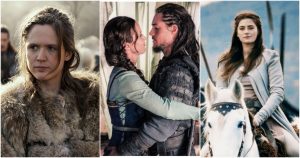 #3: Uhtred and the Women in his life.
The 9th & 10th century was not a period where women had any power or rights (though Aethelflaed, a real historical character, is the proof that some women could break the rules no matter what period they lived in).
However, most women were either their father’s, husband’s or brother’s property.

In the books it seems as if Uhtred aims to sleep with just about every woman he comes across and thus gets a name as a womaniser.
This would not go right with audiences in the 21st century and after MeToo movement.

Therefore his relationships with women was soften and the element of sex was reduced. 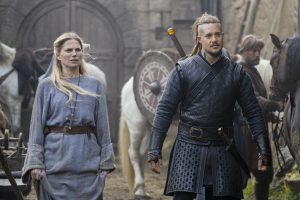 In the books, Uhtred and Hild do not have a platonic relationship.
Uhtred saves her from the Danes and she becomes his friend and lover.  The scriptwriters chose to drop the lover part and leave her as a dear friend to Uhtred throughout the entire show. This allowed them to write one of the sweetest and most poignant lines from Uhtred when he looks at Hild and says, “you’re too good a woman for God alone.” This wouldn’t really make sense in the books, but tells us a lot about Uhtred more than any “sexy” scene might show.

Another example is his relationship with Iseult.
In the books, the two become lovers right off the bat. In the television series, writers clearly wanted to create a “slow burn” with the viewers by making “The Shadow Queen” particularly protective of her virginity, believing it to be the source of her power. In the series, it’s Iseult who eventually grows weary of her psychic powers and asks Uhtred to sleep with her so she can finally have peace.

Main Lesson – Adapt the story to what is acceptable by the audiences and think of ways of how this adaptation can elevate the drama and the characters. 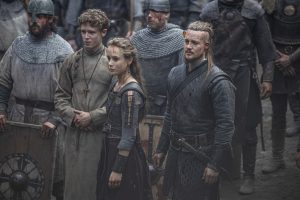 In the book Uhtred’s eldest son is called Uhtred (as the tradition goes in the family to give that name to the eldest son). However, when his son becomes a priest Uhtred (the Protagonist) denounces him as his son. He starts calling him “Father Judas”. He then changes his second son’s name from Osbert to Uhtred and he is the only son that he would recognise.

This would not have gone well with audiences today. Therefore, instead the writers chose to show us the rift between the two, due to his eldest son’s wish to become a priest, but keep the relationship between them even though it is tense. This gives a much wider spectrum of drama to the story and a deeper look into Uhtred’s personality.

Main Lesson – Make sure you keep your Protagonist as a character audiences can create empathy with or understand even when his/her actions are not amiable. In the series Brida serves as a representation of the “Road Untaken” by Utherd.
She is the constant reminder of where he came from and his inner conflicts between being a Saxon or a Dane. Brida becomes his Antagonist towards the end of the series only to get to the end where the pair had settled their dispute and are ready to make amends, but Uhtred’s daughter, Stiorra, has other plans for Brida.

Main Lesson – Instead of adding more and more characters use one that exists already to create conflicts that change through time and show the development of your Protagonist with time. 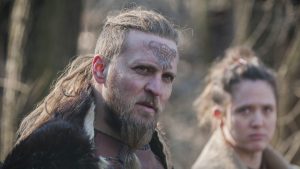 #6: The Death Of Ragnar.
Many times when books are brought to the screen they’re further dramatised to fit the medium. What captivates on the page doesn’t always grab our attention on the screen. Such is the case with many scenes in The Last Kingdom. One example of this is the death of King Ragnar. In the books, Ragnar dies peacefully in his home.

In the series, he’s stabbed by Aethelwold while he’s asleep. A quiet death adds no drama and doesn’t make for great television.

Having Ragnar die in this way allowed the scriptwriters to emphasise the importance of a Dane dying without his sword in his hands. This allowed them to develop a whole new story arc that would unite Uhtred and Brida in a mission to get Ragnar’s sword back to him.

Main Lesson – Make sure to think of dramatic endings for characters that could be used as cliffhanger and allow continuation for other stories. 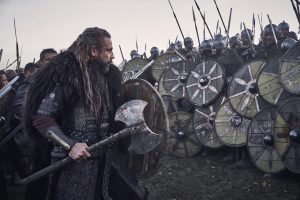 #7: Historical Accuracy.
Any historical fiction will have to sacrifice a bit of accuracy in the name of entertainment. However one of the details that’s been kept incredibly accurate in the show was the size of the armies involved.

Too often TV series and films include fight scenes with massive armies. This certainly adds to the drama of the fight but it simply doesn’t represent the reality of war at the time.

The author of The Saxon Stories, Bernard Cornwell, is all about battle. His books are full with battle accounts and detailed descriptions of weapons used. However, how many times can you read descriptions of the same sword, or how a “Shield Wall” works?

The show, on the other hand, stayed true to the violent mood of the books when it came to the battle scenes, but focused on the relationships between characters and the changing political landscape. This makes it into a much more interesting drama to watch.

Main Lesson – Though battle scenes can be exciting and full of action, focusing on characters and the bigger picture of a specific battle would make for a better drama.

What’s YOUR verdict? What did you prefer, the books or the show?